Yakumono is my OC (Original Character). It's not like, meant for any game or anything, just an OC to represent me on the Internet.

Just to say, I'm not really that good at drawing, so a lot of my work involves more like sprite editing instead. So if something looks more like something else, that's normal. I mostly took more time trying to do the character design.

It's a Mage Robot because it doesn't have to make sense, and since it's a mashup of Magolor, a very cute mage from the Kirby series, and Roll.EXE, from Mega Man Battle Network, who is not really a robot but it's close enough, hence the whole Mage Robot thing.

It is also meant to be able to change suit designs and colors depending on mood, but the default one is the Pink Heart suit and color scheme.

The scarf is like an equivalent of hair because I felt it was cuter, and the cloak added a wizard feel that I liked, though the design was a process that took a while to make sense of it in an attempt to make it cute and cool at the same time, while avoiding to look sexy which for a character with a bodysuit it is pretty hard to do that...

I started designing the character around March 2021 with some reuses of other designs, then in late October 2021 I finalized the character design to be... "mostly" copyright free.

But I enjoy what I got so far, and many other people also enjoy it, so I'm very happy about it. 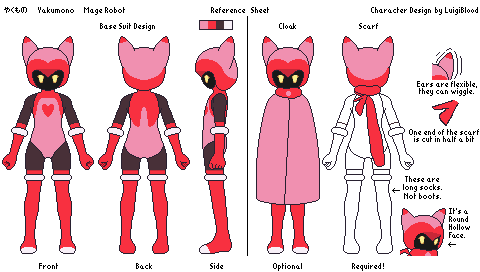 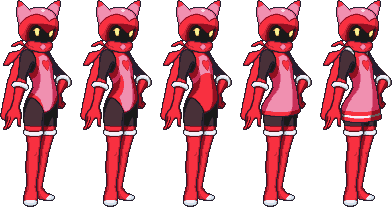